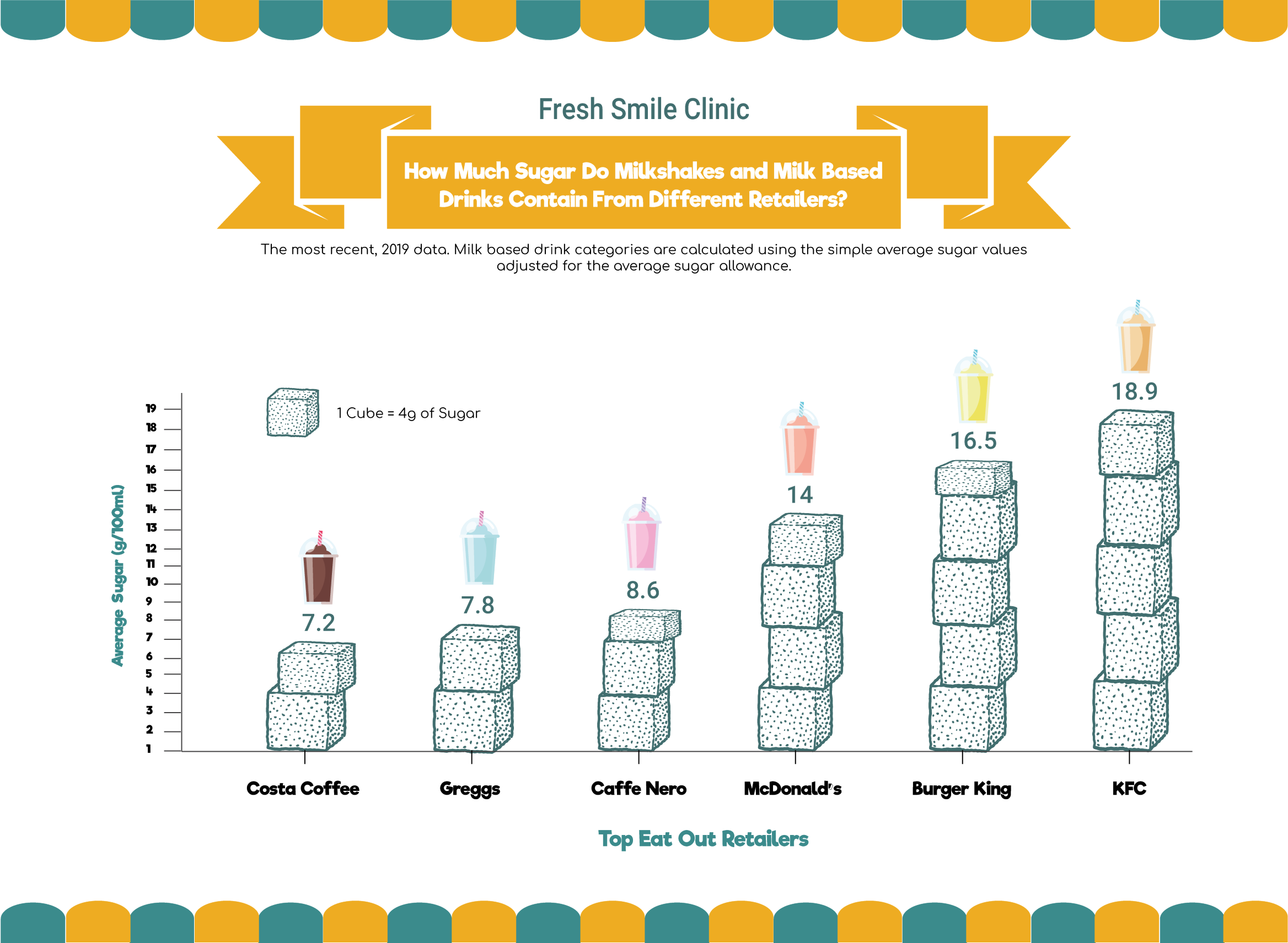 Over the past year comfort food has become even more tempting for many UK residents. Whether you’ve participated in the government ‘Eat Out to Help Out’ scheme, are taking Burger King up on their call to eat more Mcdonald’s, or are snacking on biscuits to get through a tough year, sugary and calorific foods are more appealing than ever. So, what are the worst offenders, and how can we avoid increasing the sugar in our diets?

Here at Fresh Smile Clinic, we have analysed the Public Health England Sugar Reduction report, to reveal the sugary foods UK residents can’t get enough of, the worst offending fast food/café chains, and their most sugary drinks. We’ve also given insight into the effect of these sugar levels on dental health, including children’s teeth.

How much sugar should we be consuming?

This may seem easy to adhere to - after all, who would eat 7 whole sugar cubes in a day? However, the amount of sugar in our food and drinks will shock you - just one milkshake could contain three times your daily sugar limit.

What is the effect of sugar on dental health?

Teeth are more susceptible to decay immediately after first breaking through the gums. If a child aged 7-10 sticks to the 24 grams of sugar a day limit, they could see a 10% chance of developing tooth decay in an adult tooth that’s been erupted for a year. If this is pushed to 40 grams a day, this becomes a 25% chance - a huge increase. On average, for every increase of 25g/d in sugar, one tooth in a child will become decayed, missing or filled. Any damage caused can’t be reversed, and will only accumulate, resulting in further dental damage and costs later in life.

Which sugary foods are the most popular in the UK? 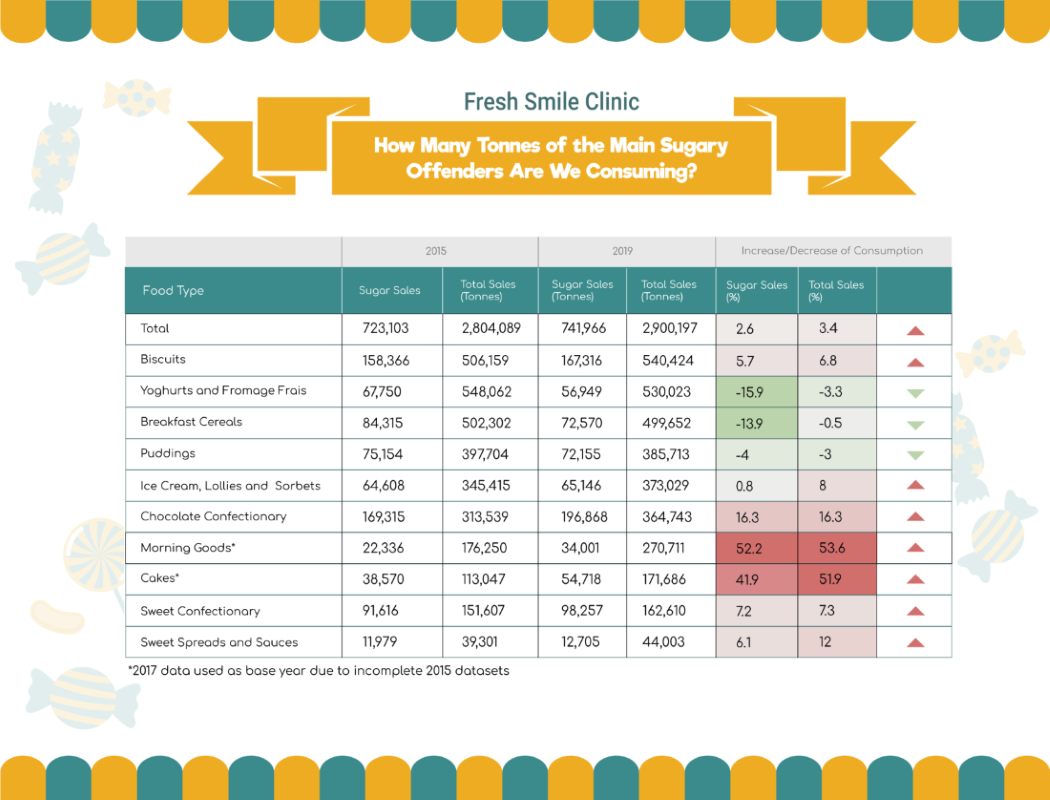 If almost 3 million tonnes of sugary food sounds like a lot, that’s because it is. 2,900,197 tonnes of sugary snacks is equivalent to 233,887 London Double Decker Buses. Per person, that’s 43.4 kilograms per year. When shared evenly across the UK population, just the sugar in these products alone exceeds the 30 gram per day recommended limit of adults.

Biscuits are the UK’s favourite sugary snack with 540,424 tonnes consumed each year.

Living in the UK, it’s basically a requirement to be partial to the odd biscuit, with the humble chocolate digestive crowned the 2020 favourite. In total, 540,424 tonnes of biscuits were consumed last year, up by 35,000 tonnes from 2015. If the average digestive is 17 grams, that’s 31.7 billion digestives eaten in 2019 alone.

Yoghurts and breakfast cereals have seen the largest reduction in sugar.

Both of these categories have seen a massive drop in the amount of sugar tonnes sold, while the amount of total tonnes consumed has remained similar. Yoghurts and fromage frais have seen an average reduction of 15.9% in sugar, yet only a drop of 3.3% in consumption. This means that many more people are buying lower sugar yoghurts, resulting in 10,000 fewer tonnes of sugar consumed per year in this category.

Breakfast cereals have also seen an average drop of 13.9% in sugar, with just a 0.5% reduction in overall consumption. Breakfast cereals are generally viewed as sugary and bad for your health, so this reduction in sugar content is great for the dental health of children that like their cereal, and adults wanting a cereal-based meal in the morning.

Which drinks contain the most sugar?

With drinks, it is much easier to add sugars without this having a noticeable effect on the taste. Take full-sugar soda, for example - a cake or biscuit containing the same amount of sugar would be inedible.

We all know that sodas contain a lot of sugar, but how do the alternatives stack up? If you’re replacing fizzy drinks with fruit juice or milkshakes, you could still be consuming more sugar than you think. 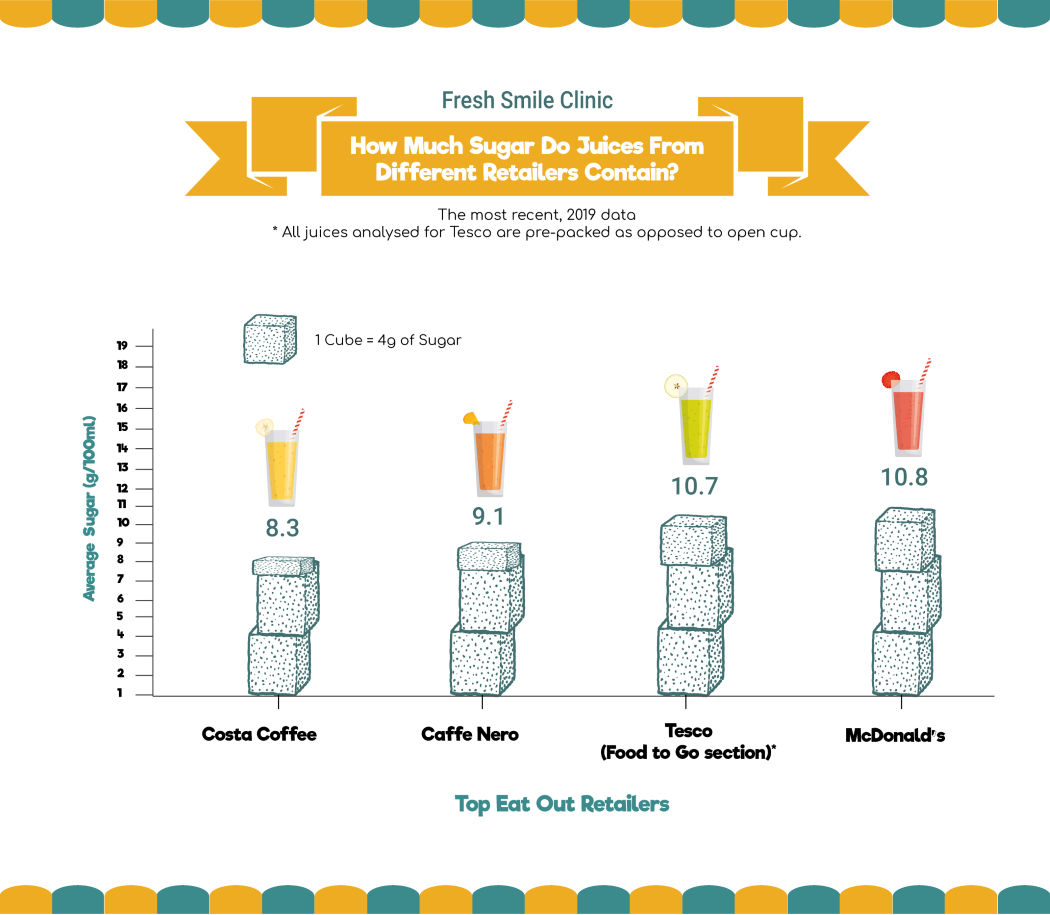 McDonald’s and Tesco fruit juice contain more sugar than a can of coke.

If you take a look at the per 100ml sugar content of Coca Cola, you’ll see that there are 10.6 grams of sugar per 100ml. Despite fruit juice seeming like the healthier option, you’re consuming more sugar in the typical juice from Tesco or McDonald’s, than you would from a soda.

While you may think that the juice you purchase from supermarkets is markedly healthier than the take out equivalent, this might not be true. Tesco’s Food to Go section has, on average, 10.7 grams of sugar per 100ml of fruit juice which is just 0.1 grams lower than McDonald’s. If you’re craving a juice drink to go, Caffe Nero and Costa Coffee both contain less sugar per 100ml than a Tesco meal deal fruit juice. Look for no added sugar, and not from concentrate labels when selecting low in sugar, natural fruit juices - a serious amount of sugar is usually added to the juices that may seem harmless and healthy. 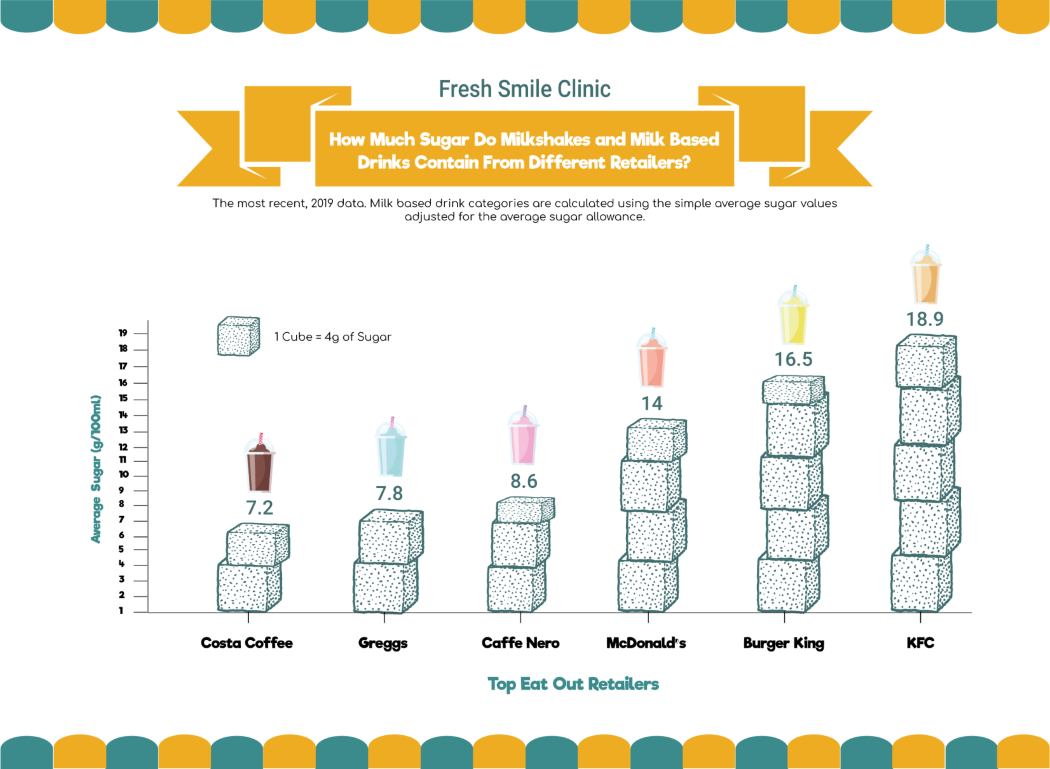 On average, KFC has the most sugar in their milkshakes and milk-based drinks per 100ml.

While milkshakes are a source of dairy, they can also contain plenty of hidden sugar which can cause more damage than any potential benefit from the calcium.

When comparing the milk-based drinks of top eat out retailers, the differences in sugar levels are vast. Costa Coffee contains, on average, 7.2 grams of sugar per 100ml, while KFC tips the scale with a whopping 18.9 grams of sugar per 100ml - almost five cubes of sugar. That’s 0.1 grams off reaching a child’s maximum sugar intake, in just 100ml of KFC milkshake.

Costa Coffee has the lowest sugar levels of the top milk-based drinks at eat out retailers.

If you’re looking to treat yourself to a milkshake, head to a cafe over a fast food place. Costa Coffee has just 7.2 grams of sugar per 100ml of milk-based drink, followed by Greggs with 7.8 and Caffe Nero with 8.6. However, as these are amounts for 100ml, stay aware of the size of the milkshakes that you’re purchasing.

How much sugar do milkshakes from fast food restaurants contain?

Following on from the October 2020 Public Health England Sugar report, which lists 2019 as the most recent data, we have also investigated the current sugar levels found in fast-food chain milkshakes. To do this, we’ve compared the most sugary milk-based drinks in each size available, from the top three fast-food chains highlighted in the government sugar report. 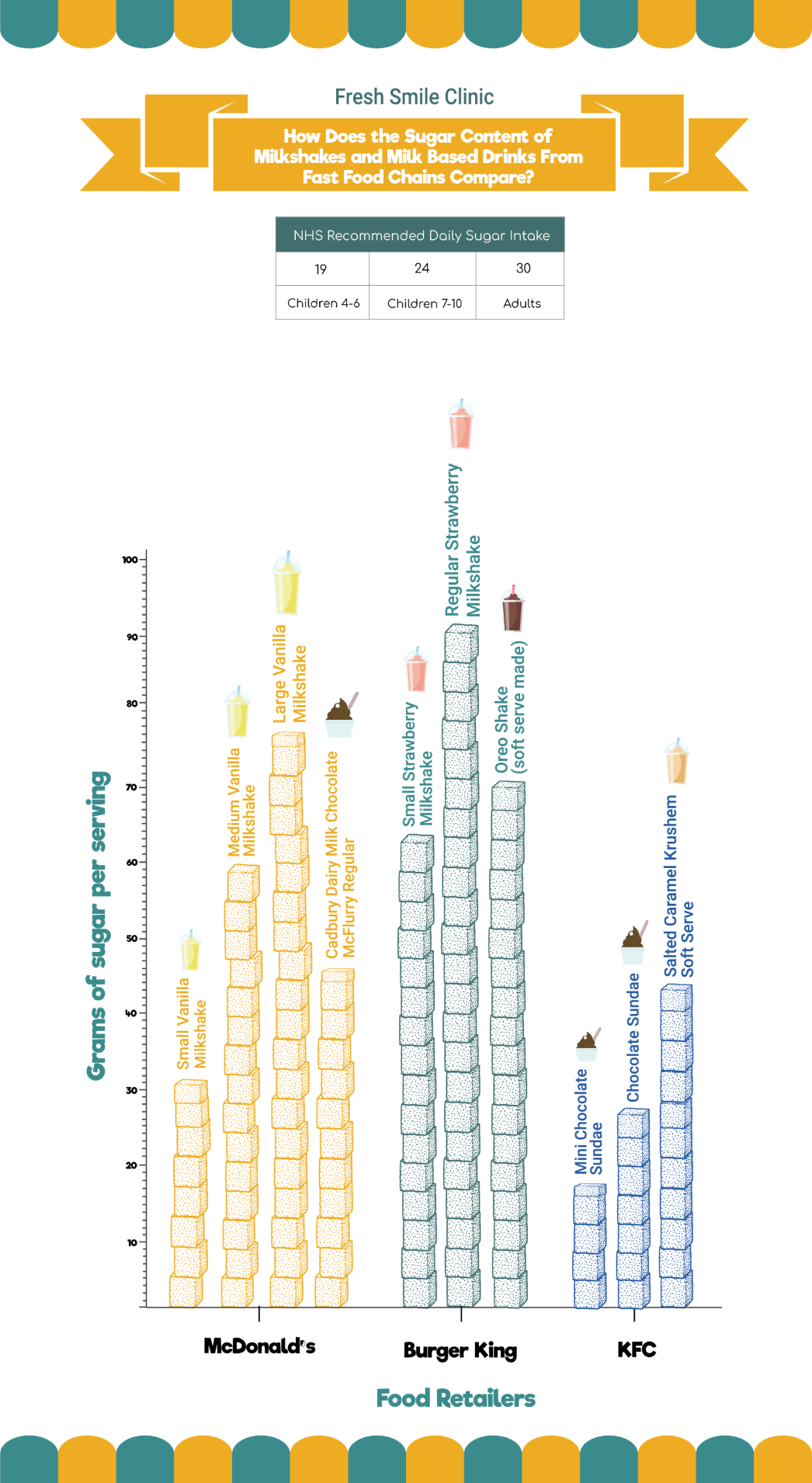 The most sugary fast food restaurant milkshakes are the:

You could be drinking three times your daily sugar limit in a single milkshake.

The Burger King ‘Regular Strawberry Milkshake’ contains a total of 92 grams of sugar or a whopping 23 sugar cubes. That’s over three times the adult daily limit of 30 grams of sugar. You would need to drink almost 850 ml of coke to equal this amount of sugar. While fast food may seem like a treat once or twice a week, two of these milkshakes would almost equal an adult’s entire weekly sugar limit.

Only one of these drinks is close to appropriate for children.

Milkshakes generally have more appeal to children rather than adults. Calcium is a vital vitamin for bone development and teeth strength, which can lead parents to view milk-based drinks as a better alternative for their children. However, the small milkshakes from Burger King and McDonald’s contain far too much sugar for a child.

The Burger King ‘Small Strawberry Milkshake’ contains 64 grams of sugar, over three times the daily sugar limit of a young child. The McDonald’s ‘Small Vanilla Milkshake’ is significantly less sugary, containing 31 grams of sugar, but this is still too much sugar for a child under the age of 10.

So, there we have our summary of the UK Sugar Report. If you’re interested in looking into the sugar in your favourite drink, or any area of the report summarised, view the full results here.

Yes please, I would like a free tailored treatment plan

Or ask us a question below and a member of our team will be in touch shortly. Alternatively why not upload photos of your teeth with a brief message and receive your own tailored treatment plan next working day.